The Situlae Festival celebrates the life of the Iron Age. It is dedicated to these extraordinary bronze monuments – situlas, which clearly testify to the life of Iron Age inhabitants of Novo mesto, who were equal to the extraordinary civilizations of Continental and Mediterranean Europe.

In Novo mesto we love cycling. Bicycle racing too. This is evident in the annual event at the conclusion of Tour of Slovenia which has its finish line in Novo mesto. It is difficult to imagine any major cycling event in Slovenia without Adria Mobil as they contribute to the events both on the organizational and the competitive level. 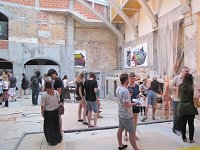 Fotopub, a festival led by young artists and curators, focuses on generating links between the freshest photographic activity and its wider cultural context. Unlike many other cultural institutions working in the field of photography, the foremost intention of Fotopub is to work actively at the site/place where emerging photographic practices meet unconventional curatorial gestures.  Fotopub occupies and builds a space for emerging artists in a need of a platform for independent research, experimentation and practice, forming a multigenerational initiative for interdisciplinary cultural integration.

Music workshop and festival Jazzinty has already been held in Novo mesto from year 2000. It's a week when Novo mesto gathers musicians of different nationalities, but with the same desire - to play jazz and upgrade their skills under the supervision of world-renowned jazz musicians. A week when a little town with evening concerts and jam sessions, that have been taking place throughout the day at various venues, turns into a jazz metropolis

Jumping into the River Krka​ (September)

The already traditional competition in jumping into water from Kandija bridge takes place on the first Saturday in September. The event represents the finals of the Slovenian Cup and the sign of international competition. At the same time, there are a number of other sports, cultural and social activities by many organizations during the whole weekend.

Novo mesto ½ Marathon has a beautiful course running through streets of Novo mesto and by the green river Krka. It is accompanied by a great atmosphere with music bands, DJ-s and local accordions. It is officially measured course with AIMS CERTIFICATE that at the same time offers events for all ages and physical fitness. Runners get rich goody bag, with gifts like local wine Cviček and finisher t-shirt and there is a free beer at the finish for half marathoners.

Museum of Dolenjska (Dolenjski muzej) was established, after many years of efforts, in 1950. The headquarters of the museum are located under Kapitelj. Museum gardens are a famous backdrop of various cultural events. Institution's trademark is a permanent exhibition Archaeological Image of Dolenjska, which is the result of many years of excavations, particularly in Novo Mesto. A section Jakčev Dom deserves a special place. Visitors can see a permanent exhibition of the Novo mesto-based painter Božidar Jakac.

Besides all the natural features, which are available to athletes in Novo mesto, we should also mention the velodrome in Češča Vas, where world records were set, stadium in Portoval, and the home of basketball champions, the Leon Stukelj hall.

Situated in the fascinating unspoilt landscape along the emerald river Krka, close to the famed Otočec Castle there is the Otočec Golf Course (18 holes). The state-of-the-art golf course was designed to the highest industry standards by the renowned British architect Howard Swan and the Slovene architect Peter Škofic, who exhibited a keen sense of the game and the natural scenery.

Above the town centre, in a meander of the Krka River, there is the Kapitelj Hill with the church of St. Nicholas and the Main Square beneath. The central part of the town boasts a picturesque street called Breg, which was built on the former defensive walls, there are also the premises of the Museum of Dolenjska with the world-famous collection of archaeological artefacts, the Franciscan monastery with a rich library, and for all the romantic souls there is a fountain with imprinted verses of the serenade titled On the Square (Na trgu) written by our famous poet and fellow resident Dragotin Kette. Therefore, it is not a surprise that the residents of Novo mesto like using the old town’s charms as a backdrop for numerous events.

The central location in the old town is the main square with its distinctive arcaded facades, originating from the 16th century. The tallest building in this part of the city is the Town Hall from 1905, which became, since its renewal, once again the seat of the mayor and a place for meetings of the municipal council. On the square in front of City Hall stand the busts of famous townsmen Janez Trdina and Dragotin Kette. The fountain in the vicinity is dedicated to the latter poet, who gave Novo Mesto some of his most prolific years, and has imprinted verses of his

Neo-Gothic façade of the church is from 1866. The rich library of the monastery from the 15th century also keeps certificates of Olympian Leon Štukelj.

When visiting Novo mesto, we cannot avoid the Krka River. And why should we? The Krka River can offer something to everyone. Boating, fishing and the walks along the river banks allow for an escape from the everyday hustle and bustle. Larger parties can choose and experience the navigation and a luncheon on Rudolf's Raft, which spoils the gusts with a unique view of the old town. Adrenaline enthusiasts can opt for stand up paddle boards, rafts, kayaks or can go diving. In the recent years, a new, ever more popular tradition has been established, namely, the attractive jumps in the Krka River from the Kandija bridge.

The Region of Dolenjska is famous for its hills covered with vines, among which Trška Gora holds a special place. The hill of Trška Gora is a popular hiking location, with its recognizable image of vineyard cottages and the church on top. When climbing up, one is guaranteed to experience a typical route among the vineyards of the Dolenjska region, the hospitality of which will certainly not leave you indifferent. From the summit, you can enjoy a remarkable view of the Novo mesto basin which opens all the way up to the Gorjanci Hills.

An outstanding tourist offer is provided also by the only water castle in Slovenia – the castle of Otočec. Historical jewel can meet the needs of the most demanding guests. What is more, in its vicinity there are also an adventure park, a golf course, a tennis centre and the Šport Hotel with a new wellness centre. 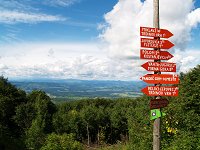 The Gorjanci Hills are the most popular hiking area near Novo mesto. Hikers usually choose the village of Gabrje as their starting point and, on the way to the top, the obligatory stops are the popular mountain lodges on the hills of Gospodična and on Miklavž. One can recognise the peak of Trdinov vrh from far due to its broadcasting transmitter perched on top.